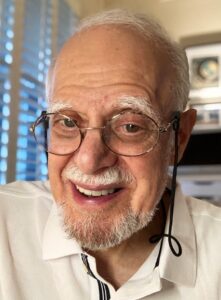 Phil Douglis is an IABC Phoenix member and one of our long-time IABC members, with an amazing 61 years of membership.

Born in Chicago, Phil graduated from Highland Park High School and is a journalism graduate from the University of Michigan. Phil spent the early years of his journalism career in New York City working on corporate publications at CIT Financial Corporation and Equitable Life. Then he moved to Philadelphia to manage communications at Smith, Kline and French Labs, and later at The Franklin Mint.

“My IABC journey began in 1960 with the New York City chapter of the International Council of Industrial Editors (ICIE), a predecessor of IABC,” Phil said. He founded IABC’s Philadelphia chapter in 1967 and wrote a column on corporate photojournalism for ICIE Reporting Magazine, which became IABC News and later IABC’s Communication World magazine. That column lasted for a half century: 1964 to 2015. In 1972, Phil was in the first group to be accredited by IABC, and he was named an IABC Fellow in 1981.

“IABC played a decisive role in my transition from a working communicator to a columnist, a workshop director and leader, and ultimately to an effective teacher,” Phil said. “IABC gave me an international forum to express my thoughts on how photographic images can work as an expressive form of organizational communication. Between 1964 and 2015, I wrote the longest running column in the history of IABC’s international publications. The ideas I expressed in that column consistently drew positive responses from corporate communicators.”

Those positive responses encouraged Phil to launch his own nationwide photographic communication workshops exactly 50 years ago. He became a teacher and helped three generations of professional communicators learn how to express their ideas as substantive visual content. “Without IABC, none of this could have happened,” Phil concluded.

Phil retired in 2008 and currently lives in Phoenix. He continues to stay active in photographic education by maintaining an instructional website. It offers over 5,000 images as a training resource in expressive photography and travel photojournalism. “I made most of those photos while traveling through more than 60 countries in retirement,” said Phil. “My website’s counters tell me that more than 13 million visitors have come to my site since I started it in 2003.”

More than 20,000 of those visitors left comments and questions below Phil’s photos, and Phil has answered every one of them. “I stay in touch with my former students and many friends by posting images from my archive every few days on Instagram,” he said.

Be sure to check out Phil’s work and leave him a message. He will gladly respond back, and you may learn something new about photography for your work or pleasure.

See Phil Douglis’ Top Three Photography Workshop Questions to find out the answers to three workshop questions he has been asked the most.